WASHINGTON – U.S. Secretary of Commerce Penny Pritzker presented Wheeling Truck Center with the President’s “E” Award for Exports at a ceremony in Washington, D.C. The “E” Awards are the highest recognition any U.S. entity may receive for making a significant contribution to the expansion of U.S. exports.

“Exporting continues to be the foundation of our sales growth, and we are honored to receive the “E” Award,” said Chad Remp, Operations Manager at Wheeling Truck Center. “We are only the seventh company from the state of West Virginia to receive this award, since its creation in 1961.  Exporting has helped our 81 year old company increase sales, and employment.”  Wheeling Truck Center began exporting in 2010 and in 4 years has sold truck parts into 94 countries. 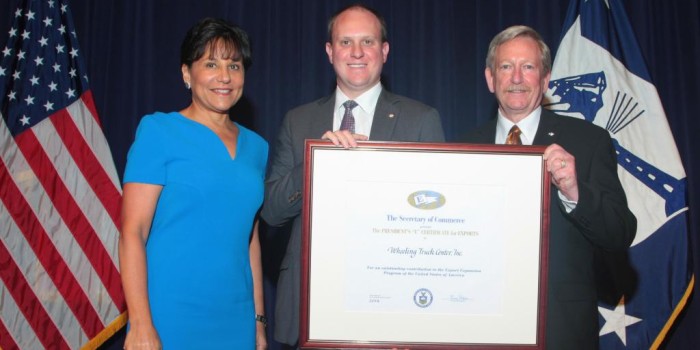 “The President’s “E” Award winners are fantastic American businesses and organizations that have played a crucial role in strengthening and growing our economy through increased U.S. exports,” said Secretary Pritzker. “By selling Made-in-America goods and services internationally, U.S. business can grow faster, hire more employees, pay higher wages, and help spread American ideas, innovation and values. Congratulations to Wheeling Truck Center for its export achievement, which helps the local community, Wheeling Truck Center and the nation remain competitive in the global marketplace,”said Secretary Pritzker in her congratulatory letter to the company announcing its selection as an award recipient.

President Kennedy revived the World War II “E” symbol of excellence to honor and provide recognition to America’s exporters. The “E” Award Program was established by Executive Order 10978 on December 5, 1961. Four years of successive export growth and an applicant’s demonstration of an innovative international marketing plan that led to the increase in exports is a significant factor in making the award.